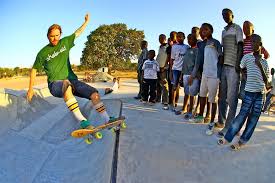 Don Bosco Skatepark was built and funded by Skate Aid, Germany Based NGO through Don Bosco Missionaries In Tanzania. This facility was built after Kintale Skatepark (Uganda) and then it was followed by Shangilia Skatepark (Nairobi, Kenya)

Currently this is the Only Skatepark in Tanzania and a home of more than 100 young skateboarders. The goal set was to help young children and youth with a sport that will fascinate them and hence they will be addicted instead of being idol and stay at-risk.

It was official inaugurated in 2013 by Torben Oberhellmann and Titus during their Visit to Tanzania. Since its opening Don Bosco Skatepark has remained to be one of the popular spot for many in Dodoma and has attracted both local and foreign visitors who come to Tanzania.

We hope many visitors would find this park amazing since it holds a story of parks in Tanzania as the first ever concrete built park in Tanzania, East Africa!!!