This article will be brutally honest. However how I (Pim Pomsy) roll is never in a pointing my finger or accusing kind of way. (so if you feel like I do..)
For those who don’t know. For years now rumors have been spreading about a split and deviation of the Ugandan skate scene. One camp telling lies about the other or the other telling lies about them, both accusing each other of not playing a fair game and saying ‘for them its just about the money, WE really care about the scene..’ (you can read more about this in previous articles posted by Augustine Rutasingwa, ASD or Roads and Kingdoms magazine)

In the history some of the facts (also sometimes changed or twisted) are agreed upon. Such as: the first park was definitely the one in Kitintale. Build by Jack who founded the USU (Ugandan Skateboarding Union) to unite skaters and build the community. Two brothers learned how to skate in this park as kids but at some point in life felt that things should go in a different direction and started their own thing.

The brothers are Gose Gerald and Kizza David, their organization: USC (Ugandan Skateboarding Community) They build the second park of Uganda in Mokono.
anyway.. all these details are mentioned in previous posts or articles so if you’re interested just look it up.

I was asked to write a short story about my personal experience in Uganda so I felt like I at least should let that get out of the way first..

I arrived in Uganda by bus from Nairobi. Nearly I got stuck on the border due to the fact that i had no cash on me. But the way of the lord (call it what you will) I arrived safely in Kampala where Sedrick picked me up.

A short side note about Sedrick.. A lot of stories and rumors have also been spreading around his name. (allegedly I heard he was selling boards which he was supposed to give away.. also rumors of theft and whatnot..)

I have had contact with him for a long time and basically he kept every promise he had made. So even if he did do the things people were saying about him, personally I never experienced anything that felt off about him.

Sedrick brought me to Kitintale where the skatepark is located and he introduced me to Jack. Jack seemed like a nice guy, he offered his living room so I had a place to sleep for the night since my arrival was kind of late.

The next day we all got together at the skatepark and I got a history lesson about skateboarding in Uganda. We went to the market and bought some chicken, and made plans for filming the skaters and shooting the interviews.

Jacks ideals for the community and skateboarding seemed straight to me but as curious as I am I also wanted to hear the other side. Funny enough, before I could even mention that to Jack and Sedrick, Jack already told me I should in fact go see the brothers. He told me “all of the skaters from Mokone are very much welcome to skate here, but unfortunately they rarely ever come” I could tell that Jack was sincerely a bit sad about ‘his’ kids departure from what he had passionately started.

All the stories tumbled in my head.. mainly because it was hard for me to add one and one together. What I felt and experienced was not what I read in the magazines or heard about. 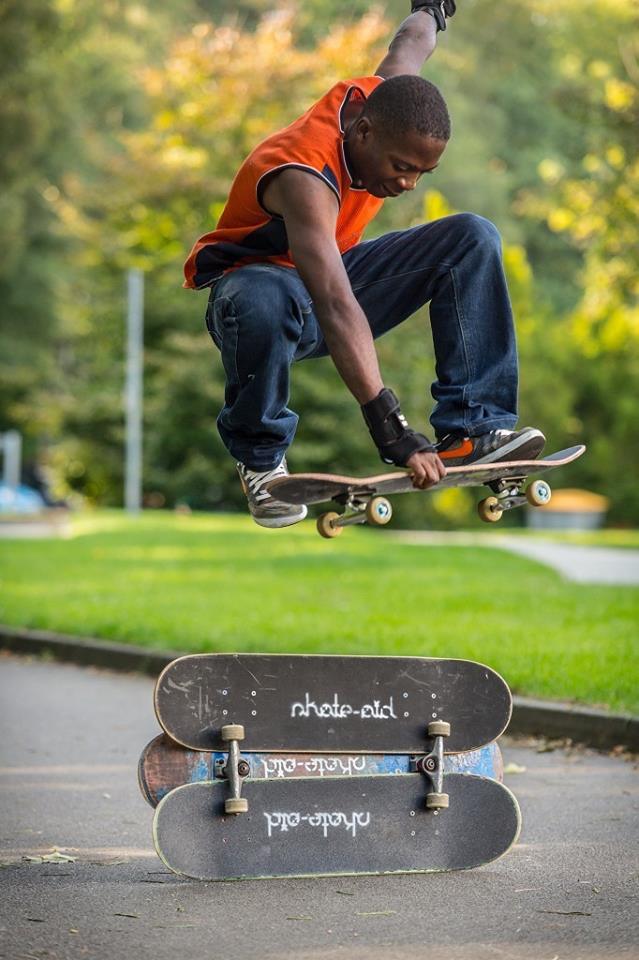 Sedrick and I made plans to go to Mokone. A long, long bus ride later we arrived in a skatepark build by Gose and Kizza. It wasn’t hard to tell that they originated in the USU camp by the design and choice of material for building the park. The design was completely different but in ways of possibilities and lines in the park it was obvious to me that they looked at the Kitintale park and added their style to improve.

The skateboarders at the USC side were just as talented as the ones at the USU side. I couldn’t believe the air these guys were getting and the tricks over the hip! Ugandan skaters from both camps can surely beat some European championships if only they were given the chance to get a visa.. (which is on my to do list btw..)

Talking with the brothers I finally got to hear their side of the story. Which was not much different from Jacks side at all. The only conclave found was that both say the other one is telling lies about the other party. But both also say the other side is welcome at their parks.

That’s not what the rumors said..

So.. fuck the rumors. (can I write fuck in this magazine?? Lol just leave it if I can)

So who is involved, what started the alleged beef? Some say it’s because of the success the skate scene in UG has seen. Sponsors and big brands came. When these guys have built everything themselves. No help from anyone. The corporations bring in money and uses the culture for their profit. Separating the community to gain control over the people. Some say skate aid came and tried to take over how it’s done. Tries to pretend the park was built by them.

But those words are also just rumors. Or merely speculations.

We could basically say: pick the one that makes most sense to you.

What I read was so much worse than reality..

Two camps, divided community, hatred and lies.. no trust. It was not like that. Maybe some things have happened between the two brothers and Jack in the past but what I saw with my own eyes was love and respect from every single person involved. They were welcoming and all received my presence with open arms.

Uganda has one of the best skate communities in all of Africa. In the way they took matter in to their own hands, which allowed them to practice the sport for a long time, creating some really great skaters.

Both the USU and USC told me they want to expand what they have started. Meaning skateboarding in Uganda is still growing. Still developing.

I just want to see the future.

Enjoy The Video Below in Kenya and Uganda